Skip to content
Caledonia Mines in Zimbabwe calls on Concord Cranes and partners to help where no one else could. 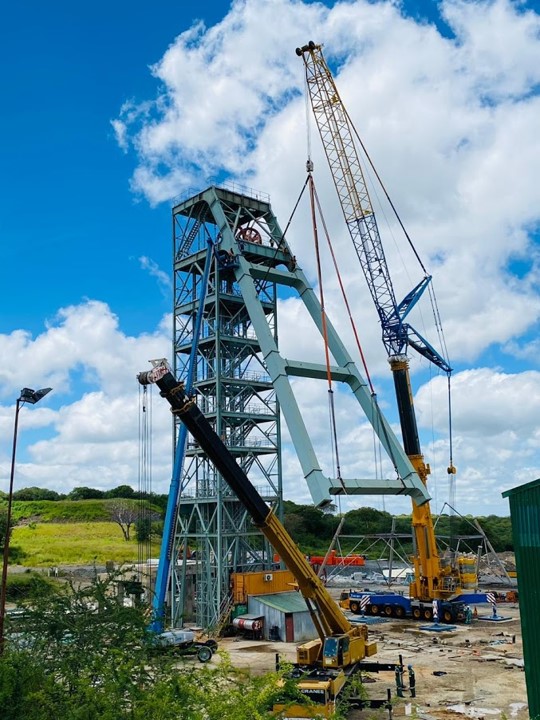 When the headgear was sinking from a 1 300m below sea-level gold mine shaft in Zimbabwe, the mining corporation could think of no better crane company to call in for help then Concord Cranes.

The project required the removal of a sinking headgear from a gold mine shaft that was 1 300m underground as well as the assembly of the new main headgear which was to stand 56m above the ground once complete. Caledonia Mining Corporation was the client in this project and the job was to take place at a mine in Gwanda, Zimbabwe called Blanket Mine.

Which crane was used for the Caledonia Mines job?

Concord Cranes chose to use the Terex AC-500 crane with luffer and extension for the job. In addition to the Concord Cranes team on the project, there were also quite a few partners involved in this mammoth project. Goscor Access Solutions manned the 57m boom, the biggest of its kind in South Africa, and there were several other companies involved in transportation, logistics, and rigging too.

“Caledonia Mining needed the shaft to be up and running in order to start extracting gold and getting back to business as usual, so all teams had to work carefully and swiftly in order to get the job done well within the time frame available” said Murray Lovemore from Concord Cranes.

Firstly, Concord Cranes had to make sure there were safe ground conditions available at the mine to set up the crane. Once this was done the crane was brought to site on 25 November 2020 and was followed by seven trucks carrying the luffer, counterweights, outrigger pads, hook block and boom extensions.

The crane was built using Caledonia Mine’s 120t Liebherr crane and, once built, was ready to begin the job of removing the sinking headgear. The Terex AC-500 was used to minimise site establishments once on site and do as many lifts as possible from one position to the next. The SX-180 from Goscor Access Solutions was used by the riggers to provide a safer working platform when needed for access from difficult angles.

Next on the agenda was the building up of the main headgear which comprised eight modules of varying weights – with the heaviest weighing around 47 tonnes.  Once again Goscor Access Solutions’ SX-180 boom was used to assist in slinging the modules at height, and, together, the two teams proved that teamwork is best in large scale jobs of this nature. “After each module was lifted and fitted, we had to go back to the drawing board and assess what we’d done and if there were any changes or additions to the weights we’d initially calculated. This meant that this part of the project took on a much slower pace, but we had to act in this way for the sake of safety and accuracy” added Murray.

The last module was fitted, and the crane was fully fitted and safety-checked by 27 January 2021 when demobilization took place. The only set back that took place during the project was when the crane was struck by lightning. “Because we were in such a remote location and due to COVID-19 regulations, it proved difficult to get technicians out to us. But, thanks to our skilled mechanics as well as the Terex South Africa team, we were able to get the crane up and running again in the shortest time possible. “Said Murray.