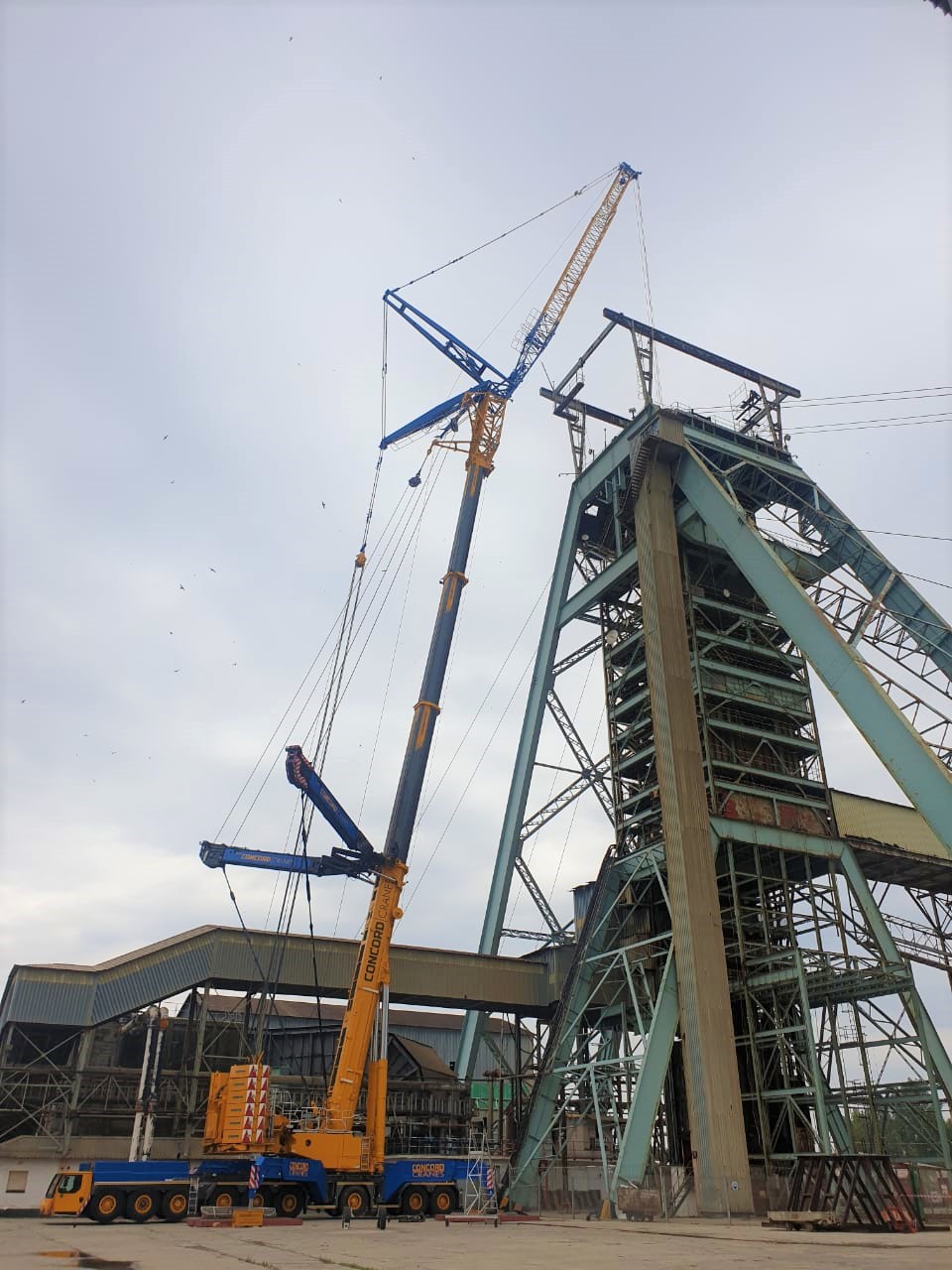 Concord’s 750t crane is one of the largest mobile cranes in Southern Africa. Concord Cranes put this heavy-duty machine to work recently for a highly technical and risky operation at Harmony Mine.

What did the project involve?

Concord Cranes has been working proudly with gold mine, Harmony Bambanani East in the Free State for over 25 years. This specific project required:
1) the removal of an unsafe structure and
2) to move a sheave wheel, which was situated above the mine shaft headgear, to ground – a large and very technical task.

“The sheave wheel at the Harmony Mine needed to be brought down for routine maintenance which occurs every three to four years. The winding of the sheave wheel performs the up and down movement of the steel cage in which the miners stand. This enables them to move from ground to below ground level,” said Japie Nel, Branch Manager and Project Leader.

“An old, disused crane was situated on top of the sheave wheel. It had begun to rust, and the Department of Mineral Resources had deemed the structure redundant and thereby considered it a safety risk. Harmony Mines required a crane that could reach a tip height of 100m and tolerate a weight of between 25 – 35 tonnes to do the job. The only mobile crane suited for the job was Concord’s LTM1750 crane. Liebherr mobile cranes are controlled precisely using intelligent technology – the LICCON computer system which has comprehensive informative, monitoring and control functions. This system accomplishes all essential requirements in respect to safe and functional crane operation which include insensitivity against environmental influences, coordination of control systems and limited plug-ins to name a few.

How was the project executed?

Concord Cranes, in conjunction with the engineering and safety team of Harmony Bambanani East, planned a very thorough step by step procedure for the complex undertaking.

Importantly, because the mine operates daily and all year round, the procedure was planned for four days over the Christmas period due to the fact that the mine then operates on skeleton staff. However, because the Free State Municipality does not permit machines of excessive weight to travel on highways after December 16th (due to the festive season traffic), Concord Cranes scheduled the 750T crane to arrive at the mine prior to 16 December.

“This wasn’t our only project challenge Once the luffer had been built, the team were ready to begin the project, however, gusty winds at the 64m height of the structure, made the project too risky and unsafe. The project was delayed for two days until the winds died down and it was safe enough to operate,” said Japie.

Once work finally commenced, the project proceeded as planned. The structure that was deemed redundant was lifted by the crane and manoeuvred down to the ground successfully. The crane then proceeded to move the sheave wheel to ground. Routine maintenance was done to the sheave wheel and when ready, it was hoisted up and replaced successfully by Concord’s 750t crane.

“Overall, the project took six days to complete. It was a challenging task but overall, the project was executed successfully. We were very proud of our skilled team who operated the crane and managed the project. Our 750T did a great job and she really showed off her powerful capabilities” ended Japie.

To learn more about the capabilities and features of our 750t crane, contact our team of specialists info@concordcranes.com