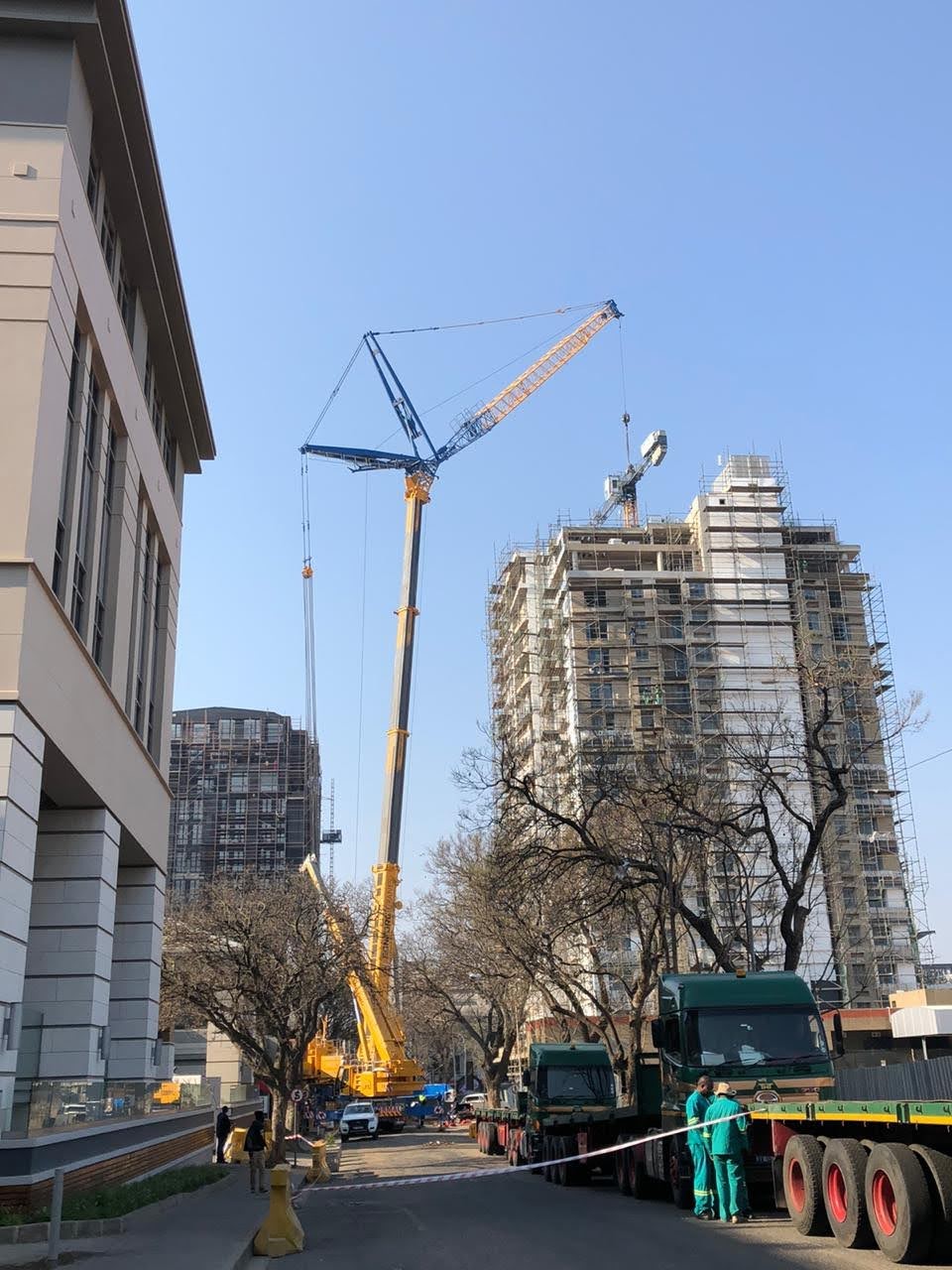 Dismantling of a Tower Crane Within One Weekend in Rosebank

When a job in the busy heart of Rosebank, Johannesburg required the dismantling of a tower crane within one weekend, the only company that was fit for the test was Concord Cranes.

Why was Concord Cranes called to dismantle a tower crane?

A tower crane was being used during the construction of The Median, a mixed-use development in the centre of Rosebank. The tower crane had completed its work and needed to be dismantled. The Concord Cranes team was called in to dismantle the crane, but there was one major requirement for the job.

“The tower crane was in the centre of the building and in order to dismantle it, we had to use our 750t Liebherr with luffer and jib extensions to enable us to reach up and over the building. The catch was, all of this had to be done within one weekend because we had to shut a main feeder road leading into the Rosebank Mall. We had to be finished by Monday morning when business returned to normal” said Murray Lovemore, Sales Representative for Concord Cranes.

The project in Rosebank was due to begin at 7am on the Friday morning, but first the 750t All Terrain Crane had to be taken off a mine in Marikana and that logistical operation began at 3am that morning. It required the packing of trucks to carry the counterweights, luffer, jib sections, pads and power packs.

“Prior to arriving on site, road closures and traffic barricades were also organised due to the site being in a congested area, thus we had to limit traffic into the area from 6am on the morning of project. The building of the 750t began at 7am and we had to navigate the buildings between Rosebank’s Jacaranda trees very carefully. The crane took around 16 hours to build to be lift-ready and work to dismantle the tower crane began at 7am the next morning” adds Lovemore.

The Concord Cranes team was used for this project due to the company’s extensive experience with larger cranes in built up metropolitan areas. Months of planning went into this project, and every intricate detail had to be planned to the tee due to the very tight deadlines. Time management was key on this project, especially when getting the 750t from the mine to Rosebank all within seven hours including a change in the team on the ground. The project scope was very different and it required it to be well orchestrated.

The project started with the dismantling of the tower crane counterweights, then the jib, operator cabin and then the vertical columns in sections. (See diagram below). In building the 750t crane, Concord also made use of a 100t build crane for its assembly, so the 100t then became a second crane on the ground used for breaking the dismantled sections of the tower crane into their smaller, individual components.

How did it take to dismantle the tower crane in Rosebank?

The dismantling of the tower crane took approximately 14 hours and the building and breaking of the 750t took around 26 hours, with the whole operation beginning at 7am on Friday and ending around 10pm on Sunday.

“It was an all-round unbelievable performance from the Concord Cranes team. Everyone played their individual roles incredibly and we managed to pull off the job within the designated timeframe. You can only be happy when a project goes to plan and everyone in the team plays their part” ends Lovemore